Constant disconnection of BT Business Smart Hub 088315 for 6 months - BT out of ideas...

I'm at my whits end with this as i've exhausted nearly every possible resource available to try and resolve the issue.  Started about 6 months ago when we suddenly started getting alot of drop offs and disconnects with the router.  Usually starts in the morning and stops around 4-5pm so basically during work hours.  We're a small medium size supermarket with a relatively normal network.  The hub supplies the main network which is then connected to a server and patch units to relay the signal to other ports around the store.  We also have another router on the shopfloor which supplies wifi to the card machines.  Theres roughly around 76 devices connected to the hub currently.

The router will lose connection randomly throughout the day, it could be twice, it could be 10 times a day.  Weirdly the connection will be stable through the weekend and we get ZERO drop offs then, its only Monday to Friday... When the connection drops off, it usually reconnects fairly quickly, usually around a minute or 2 but sometimes does take longer.  Theres been the odd time where we've had to manually switch it off and turn it back on again for it to regain a connection.  The lights will switch to orange/yellow before going back to blue.

So far BT engineers have been out around 5 times to see about fixing the issue but they've also exhausted all efforts now.  They have:

As you can see, its quite an extensive list, i probably missed some but this is what i remember off the top of my head that had been tested and carried out.  The engineer said the logs don't really tell them anything thats causing the drop offs other than "It has lost connection and reconnected".

I'm started to think the issue isn't with the line itself but with how many devices are connected to the Hub and it simply cannot handle it.  This issue only started around the time when we had a influx of new staff join our office which meant a whole bunch of new hardware had to be connected to the network inc phones, computers and new wifi till card readers etc.  Im suggesting this might be the issue because i had a similar issue at home with my virgin hub where it could disconnect constantly because it couldn't handle all the devices connected.  Again this only occurred after i decided to install a large amount of smart devices, once i changed the router to a mesh system the problem disappeared.  My theory lies heavily on the fact that during the weekend no drop offs occur and this is also the time when most of the office staff are off duty meaning most of the devices that would be connected during the weekday are offline.

Could anyone concur that this could be the issue that the hub router simply cannot handle all the devices connected to it?  Would a aftermarket more powerful router or mesh system help with this issue for our store?

This is the socket that BT as installed which i've just noticed is the same as the other thread that is having connection issues.  However there is no micro filter in place before the router, the line simply connects straight to the router.  How would i get a micro filter in place or is there something else i can do to test whether this is causing the issue? 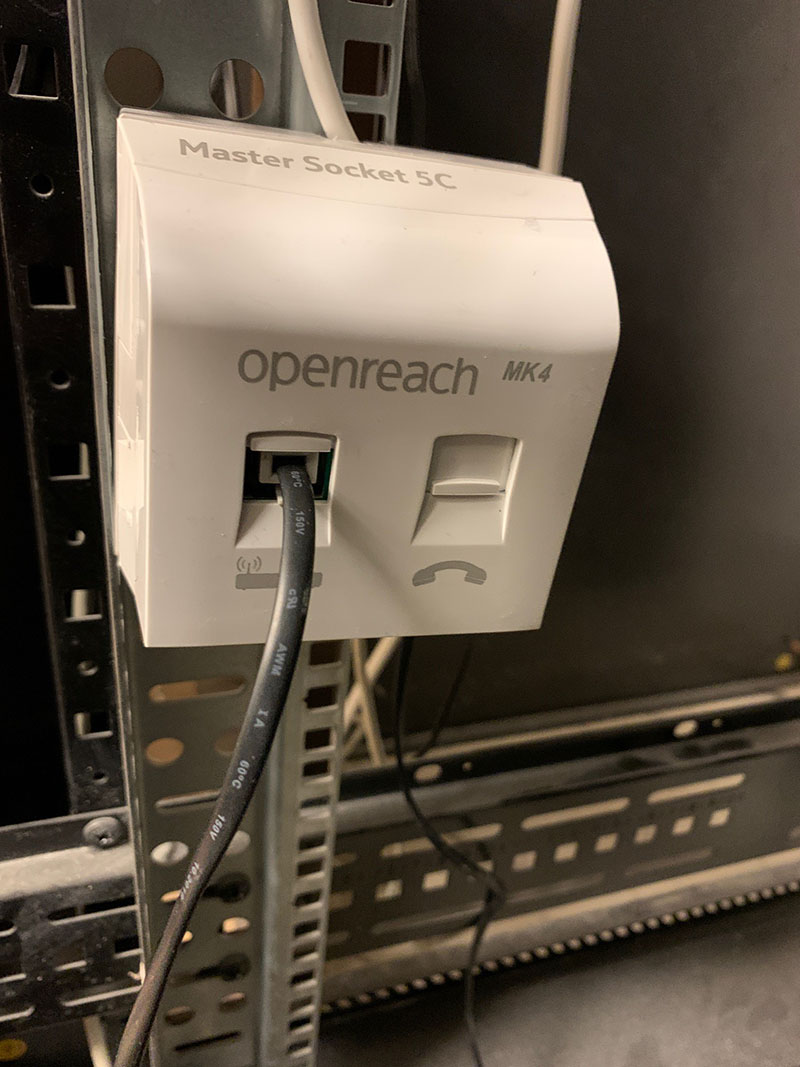 Thanks for your time

Feel the pain, I have had this for 6 months about 8 engineers, replaced eveything still having drops. Pain in neck as wife on conference calls, kids on net for school, nobody seems to want to fix the fault, happens more or less every day. Even bought a decent router still the same.

I would suspect the actual problem is at your exchange or to do with the phone lines to your property.

Don't know where you live but many places are still using 'old' wiring that just simply can't cope with the amount of traffic that it's being subjected to.

I had very similar issues with my phone line and broadband for two years until some clever engineer fixed it.(8 or 9 had tried doing all the things that you described with no joy) He decided to swap our lines at the exchange to avoid going through some old wiring in the road about 300m away. All of a sudden problem solved - no noisy phone lines and constant broadband. Hope you can get it sorted.

Is it the wifi that disconnects or does the connection to broadband drop? Before you reboot is the blue light showing?

Can you connect one laptop to the hub by ethernet?  I regularly lose wifi but the ethernet is solid.

BT support are not very helpful.  I wanted a technical person to review the logs but they would only send an engineer.  The support person did not really understand my problem and said 30 devices was too many!!!  This is just not true.

Re: Smart HRe: Constant disconnection of BT Business Smart Hub 088315 for 6 months - BT out of ideas

I found my connection much improved after I moved a cordless phone base station into a different room.

You could replace the BT Hub with a Draytek Vigor modem/router.  These can be had on eBay quite cheaply if you don't need 5GHz.

BTB support don't even reply to my requests now.

Are you actually losing the broadband connection or this problem with computers connected via wifi?

I'm sorry you've had all these issues with your connection. I am more than willing to get to a resolution with you. If you are still having issues, feel free to PM me